Nerds of the Round Table

For all things good and nerdy 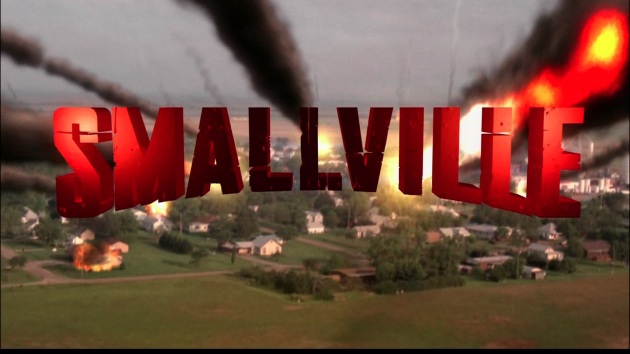 The series finale of Smallville is rapidly approaching and as of right now there is a lot of ground to cover in the last 2 hours remaining.  Fans everywhere have their expectations of how the show should end its 10-year run.  Realistically, not everyone is going to end up being happy with the end.  It’s just the way things work.  For example, I’m a huge Battlestar Galactica fan but I absolutely despise the final episode (past the half-way mark at least).  The ‘God did it’ explanation really let me down because I had built up in my head how I thought the show would end.  My vision and Ron Moore’s vision did not mesh up one bit which lead to a lot of the disappointment on my part.  I think a lot of Smallville fans could run into the same problem I had with BSG.  It doesn’t help that Smallville has a lot of plot threads to tie up in its 2-hour finale.

Last week’s episode of Smallville entitled Prophecy was fairly disappointing to say the least.  Clark allows Jor-El to mess with his life one last time and we saw Lois Lane magically turn into a Lana Lang clone.

Despite taking the whole season to show how well Lois and Clark work together the writers gave us a quick 180 and had Lois break things of with Clark.  Does this make sense to anyone else, because it sure doesn’t for me.  Lois has been the one saying all season that she and Clark were strong together and could get through anything.  After having him go missing for 3 weeks and standing by his side she decides to leave him when she sees just how strong he is?  Completely out of character for the way Lois Lane has been developed this season in Smallville.  I really think the whole ‘pre-wedding break-up’ was just a tool to add more artificial drama to the end of the series.

Needless to say, it’s fairly obvious the Lois and Clark breakup is one of the items that will need to be fixed in the finale.  We already know its going to happens since CW released photos of Lois and Clark at the wedding!  That’s just another reason why I think the breakup was a cheap way to create tension/drama.

That’s just one item left to fix, but there are a few others I can think of listed below.  Hopefully they are able to tie up all or most of the points.  There might be some minor spoilers so read at your own peril.

This is a lot of ground to cover in the final two hours and fans cannot realistically expect every plot point to be covered.  If the majority of these plot points are covered I’ll be happy.  But if Clark never flies or dons the Superman costume I will be sorely disappointed.  It looks like we’ll find out tomorrow how everything ends.  I really do hope that fans are able to manage their expectations so they aren’t disappointed with the end.  We’ve had 10 fun years of Smallville and I would hate to have it tainted by a finale that leaves a bad taste in my mouth.
Smallville Clark Kent, Lex Luthor, Smallville, Smallville Finale

So the CW is continuing their Destiny is Now promos for Smallville.  Now a new one has hit the web, but honestly I don’t think its as good as the last picture.  This picture teases Clark wearing the suit as well, but its much less subtle than the last one.  Clark’s shadow is him wearing the Superman costume.  The picture is below for your viewing pleasure. 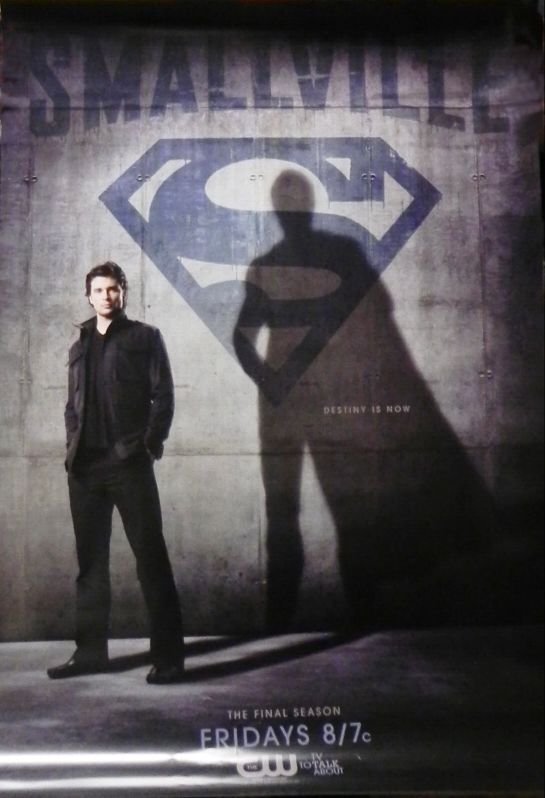 I’ll be the first to admit that since this is Smallville’s last season I have been paying the show a good deal more attention. In fact, most of the recent blog posts probably reflect my renewed/heightened interest in the show. In all honesty, season 10 has already exceeded my expectations. It’s been fun and continued to grow Clark Kent into the man he will be when he dons the Superman suit. Life changing events, i.e. Homecoming, have started this shift and so has the costume change we saw in Shield (10×02).

As much as the Cat Grant character annoys me (which I realize she is meant to do) she was right about one thing. How are people supposed to trust these heroes that hide in the dark and cloak themselves in the shadows? One of the reasons Superman is so beloved is that he stands out and is recognizable. The mask-less costume and the bright colors that comprise his uniform make him very visible to the public. Meanwhile, the Blur is the exact opposite. The Blur kept to the shadows and prevented himself from being seen at nearly all times. Needless to say, this does not allow him to be viewed a friendly to the public. At the end of Shield, Clark has taken another step towards becoming Superman by creating a suit that allows him to stand out and not be as hidden from the people of Metropolis. 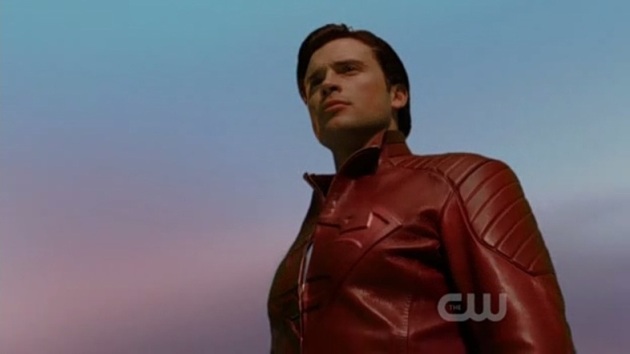 I’ll be honest I didn’t like the Matrixy Neo-like costume that Clark was wearing in season 9.  Or rather I didn’t like it at first.  Once I came to the realization that this was Clark’s first step as a costumed vigilante the costume grew on me.  Clark’s only exposure to the world of heroes has been people who hide in the shadows and aren’t easily viewable, so it only makes sense that his first costume would reflect this mindset.  If you don’t believe me look at Green Arrow.  He hides to the shadows and changes his voice so as not to be recognized.

I’m really hoping that the new costume grows on me like the black suit did.  Right now, I can honestly say that I am not a big fan of the new suit.  I do like the fact that Clark has finally begun adopting the traditional Superman colors.  However, the all red embossed leather jacket just doesn’t do it for me.  I think part of my dislike is that is a solid color and the House of El crest doesn’t stand out.  One of the things I liked about the black suit from the very beginning was that the silver House of El crest was easily viewable on the black t-shirt.

If a few changes were made to the new costume it would be much more palatable to me, and probably other fans.  I really think that something should be in place to break up all the red of the jacket, or maybe even make the jacket blue.  If the House of El crest were a different color and some color were added to the shoulders of the jacket.  When I was surfing the web the other night I found that some others had the same thought as I did and had posted some of their ideas online.  The concept below is what I think would be awesome for the current costume.  I’m going to dig through my history and try to find where I found it so I can credit the designer. 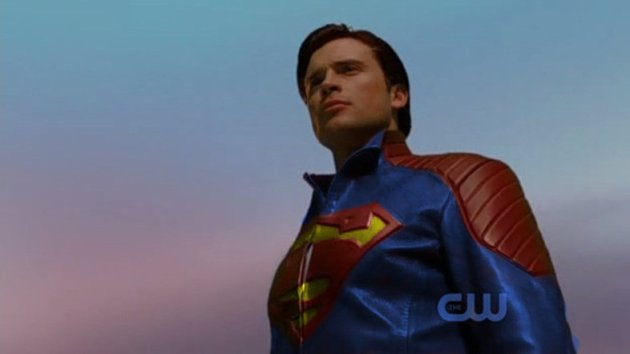 Honestly, I’m probably just nit-picking when it comes to the new costume.  It’s a step forward and continues to build Clark Kent up as the man who will be Superman.  The costume is changing, heck even Clark’s hair while in costume is starting to look like the traditional Superman hair style from the comics and movies.

Hopefully, this is the final costume evolution before Clark dons the costume everyone wants to see… 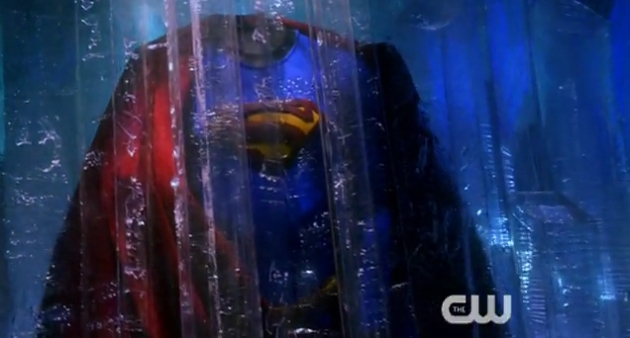 In an effort to make up for my lack of post earlier this week I bring you another weekend post.  We’ve got a pretty decent screenshot of Clark’s new costume in the 9th season of Smallville.  Looks pretty Matrixy to me, but I can deal with it.  What do you all think?  Oh, and as always click the picture for a larger version.

Okay, so I lied.  We have one last little bit from the San Diego Comic Con and after seeing it you can probably forgive my unintentional lie.  It seems that now some of the footage of the Smallville trailer has hit the web.  I caution you, the quality is fairly bad but at the very least you can sorta see Clark’s pre-Supes costume.  Honestly, I think the most enjoyable part of the trailer is the screeching of the one fangirl really close by.   The first clip is the extended trailer, it gets really good at the end.  If it doesn’t work check out the other links they should be good for a bit longer.

If we find better footage, we’ll switch it out.

Just a heads up, the movie below is probably the one of the best quality.

Clark Kent Flew in Smallville? You Make the Call

The creators of Smallville in the past have said that the Clark Kent of the Smallville ‘verse will not fly until he dons the cape and tights.  That being said they have teased the hell out of us for years with Clark flying.  His Kryptonian persona of Kal flies and so does his cousing Kara, but never has Clark flown.  Instead he’s just done the following:

The directors cut of the Season 8 finale hit the web.  It doesn’t have any special effects but there is a slightly different cut than I remember of Clark’s fight with Doomsday.  In the Director’s Cut it looks like the closest Clark has ever come to flying in the show.  Clark pushes off the ground and transports Doomsday a vast distance to his end.  The question is, did he fly or was it another one of Clark’s ‘special’ jumps.  I’ll let you the reader decide, check out the video below.

All Things Good And Nerdy

All of the names and trademarked images on this site belong to their respective companies and/or copyright owners. All original content on this website (such as my columns, pages or any other content which I write) is protected under copyright law as of the time it is posted. You may link to it, and if you quote short passages please attribute the quote to me. You may not reproduce whole columns or multi-paragraph portions thereof without my express written permission.